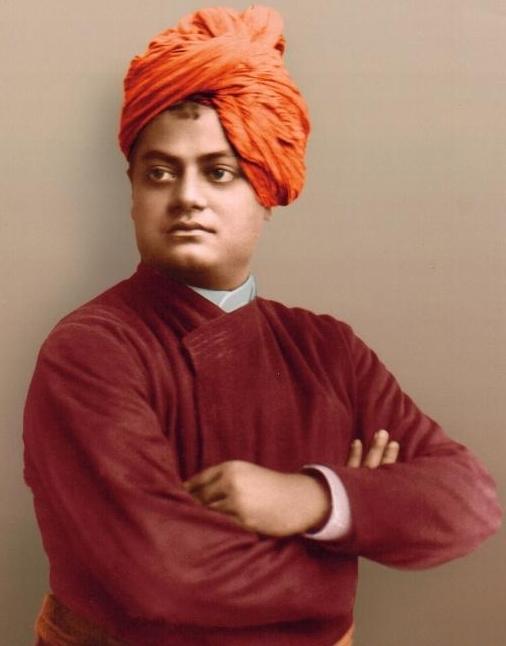 Event: Day Conference and Film Screening:
Impact and Internationalism: The Life and Thoughts of Sri Aurobindo and Swami Vivekananda.

His main literary works are The Life Divine, which deals with theoretical aspects of Integral Yoga; Synthesis of Yoga, which deals with practical guidance  to Integral Yoga; and Savitri, an epic poem which refers to a passage in the Mahabharata, where its characters actualise integral yoga in their lives. His works also include philosophy, poetry, translations and commentaries on the Vedas, Upanishads and the Bhagavad Gita.

Swami Vivekananda was an Indian Hindu monk and chief disciple of the 19th-century saint Ramakrishna. He was a key figure in the introduction of the Indian philosophies of Vedanta and Yoga to the Western world and is credited with raising interfaith awareness, bringing Hinduism to the status of a major world religion during the late 19th century. He was a major force in the revival of Hinduism in India, and contributed to the concept of nationalism in colonial India. Vivekananda founded the Ramakrishna Math and the Ramakrishna Mission. He is perhaps best known for his inspiring speech which began, "Sisters and brothers of America ...," in which he introduced Hinduism at the Parliament of the World's Religions in Chicago in 1893.

The purpose of this conference is to:

Conference Program:
“Impact and Internationalism: The Life and Thoughts
of Sri Aurobindo and Swami Vivekananda”

Summary: The conference “Impact and Internationalism: The Life and Thoughts of Sri Aurobindo and Swami Vivekananda” aims to explore and link Sri Aurobindo's and Swami Vivekananda's lives, thought and personal encounters. We are going to elaborate on Aurobindo’s philosophy and views of human evolution, commentaries on Indian classical texts, his poetry and Integral Yoga. We will explore Vivekananda’s approach to Indian philosophy and look at how he introduced the Indian philosophies of Vedanta and Yoga to the Western world and thereby rose interfaith awareness as well as reviving Hinduism in India.

We also aim to demonstrate how both these influential figures have changed life in India, for example Indian nationalism, and the international perception of India and its thoughts – through their pluralist philosophies, their social engagement, the East-West encounters, their consciousness of being global, and the ways they dealt with intercultural challenges.

Through this conference, we want to provide a forum for networking among scholars and the wider public who are interested in Sri Aurobindo's and Swami Vivekananda's life and thought and their contemporary global relevance.

10.15-11.00    Keynote by Lord Charles Bruce: “Navigating the complexities in Indian modernity and the rise of nationalism: the contrasting impact of Swami Vivekananda and Aurobindo Ghosh.”

The formative period of two of India’s leading thinkers at the dawn of modernity, Swami Vivekananda and Aurobindo Ghosh, coincided with the high-tide mark of the British Raj at the turn of the twentieth century. Both Bengalis grew up in the confinement of a colonialized society - each received an Anglocentric education - and yet both were at the forefront of the rediscovery of the Hindu Vedanta.

Critically the issue of modernity is treated here as an important lens giving a perspective to view the impact of both individuals on their own and succeeding generations. Context is equally important: the paper will consider carefully the impact of important historical processes such as the Bengal Renaissance, the Hindu Revival and the second (1905) Swadeshi Movement which was prompted by the Partition of Bengal.

In exploring the roles of Vivekananda and Aurobindo, the paper will compare the contribution that each made to the transformation of Indian national consciousness between 1890-1910.  Vivekananda  achieved extraordinary significance as an international figure at the Parliament of World’s Religions at Chicago in 1893. It was a role that projected him as perhaps the most cosmopolitan Indian of his generation but consumed him and led to his untimely death in 1902.

Aurobindo rose to prominence as the most formidable political organiser of his time. He was widely regarded as an inspirational propagandist for the cause of independence from colonial rule a decade before the advent of Gandhi’s satyagraha movement in India. But his withdrawal from politics at the age of 38 to follow a contemplative existence in pursuit of Truth-Consciousness must rank as one of the great “what if” moments of Indian twentieth century history.

Rabindranath Tagore (1861-1941) and Swami Vivekananda (1863-1902) were born only two years apart from each other. For Swami Vivekananda, education was the most important way to improve the lives of the Indian people. Rabindranath Tagore shared this emphasis on education, both in his writings and in his practical works (for example, the education projects at Santiniketan). At first glance, the educational ideas of these two celebrated Bengali intellectuals look very similar. Both thinkers base their philosophy of education on the Upanishadic philosophy and fuse old Indian traditions with modern Western approaches; they criticize colonial education; they believe that teachers should be gurus and teach through ideals; that education is not about mechanical learning and mere amassing of knowledge; that education should be holistic and include the body and the spirit and teach both science and arts; that education should be founded on the culture of a country and be taught in the mother tongue wherever possible; that education can uplift the poor; and that women should be included in education. Yet a deeper exploration reveals significant differences in their aims and ideals of education as well as their pedagogical methods. This paper highlights how Vivekananda and Tagore propose different notions of personality, of  concentration, of creativity, and of the relationship between atman and brahman.

11.45-12.05    Dr Tom Kane (Lecturer at the School of Computing, Edinburgh Napier University): “Two Spiritual Teachers, Fifteen Days in Alipore Jail, and a Glimpse of the Supermind”

This paper explores the teacher-student relationship that developed between Swami Vivekananda and Sri Aurobindo over 15 days between 1908 and 1909.  The teaching took place while Aurobindo Ghose, a well-known political writer and activist, was incarcerated in Calcutta’s Alipore Jail, falsely charged with the murder of two young women.  Sri Aurobindo later spoke of the incarceration as a necessary part of his spiritual development.  He had been drawn, forcibly, away from his hectic outer life activities; found himself peacefully engaging with the ancient Upanishads of Vedic times; and, finally, he was personally taught by Swami Vivekananda in the workings of higher levels of consciousness and the spiritual art of Intuition. The story is surprising because Aurobindo Ghose had been kept in isolation during the period in question and Swami Vivekananda himself had passed away 6 years earlier.  What is known is that Sri Aurobindo credited the teaching he received during that period for making it possible for him to developed a Yoga of working with the Intuitive mind, the Overmind and the Supermind.

The latter half of the 20th century saw the growth of Hindu nationalist organisations in India and their increasing influence on both Indian politics and society, which was reflected in the outcome of the most recent Indian general election in 2014. The public acknowledgment by prominent Hindu nationalist groups of their indebtedness to Swami Vivekananda (1863-1902), founder of the Ramakrishna Math and Mission, has led scholars and social commentators to re-assess Vivekananda’s legacy, and to debate whether it fostered a climate of ideas that has proved to be sympathetic to the popularisation of Hindu nationalist sentiment. This ‘relocation’ of Vivekananda’s legacy has moved it away from the purely spiritual realm, where it has been preserved by his devotees and the movement he created, and into the controversial realm of Hindu nationalist (Hindutva) ideology and the political and cultural agenda of organisations that promote this.

Kolkata and its surrounding area, where Vivekananda encountered and interacted with his guru Sri Ramakrishna, has long been particularly associated by devotees with Vivekananda and his spiritual master. This remains the location of the HQ of the Ramakrishna Math and Mission. One outcome of the celebration in India of the centenary of Vivekananda’s birth, however, was the creation of the dramatic Vivekananda Rock Memorial off the shore of the small south Indian town of Kanniyakumari. The campaign to erect this monument was orchestrated by the Hindu nationalist Rashtriya Svayamsevak Sangh or RSS (National Volunteer Association), and the monument has been largely managed since its inauguration in 1970 by the Vivekananda Kendra, also a Hindu nationalist organisation.

The paper gives an overview of the life and work of these two great spiritual figures, looking at Aurobindo’s Integral Yoga and Vivekananda’s Vedanta. Vastly different from each other in approach, both men were radical and revolutionary in their own unique ways, both hugely influential in shaping what we know as Hinduism today. The paper looks at the continuing relevance of their teachings in a world desperately in need of oneness, and considers in particular the insights into their philosophy expressed in the writings of the great contemporary teacher Sri Chinmoy.

Day Conference and Film Screening on Sri Aurobindo and Swami Vivekananda, Registration Form
Contact: Neill Walker, This email address is being protected from spambots. You need JavaScript enabled to view it., 0131 331 4469.